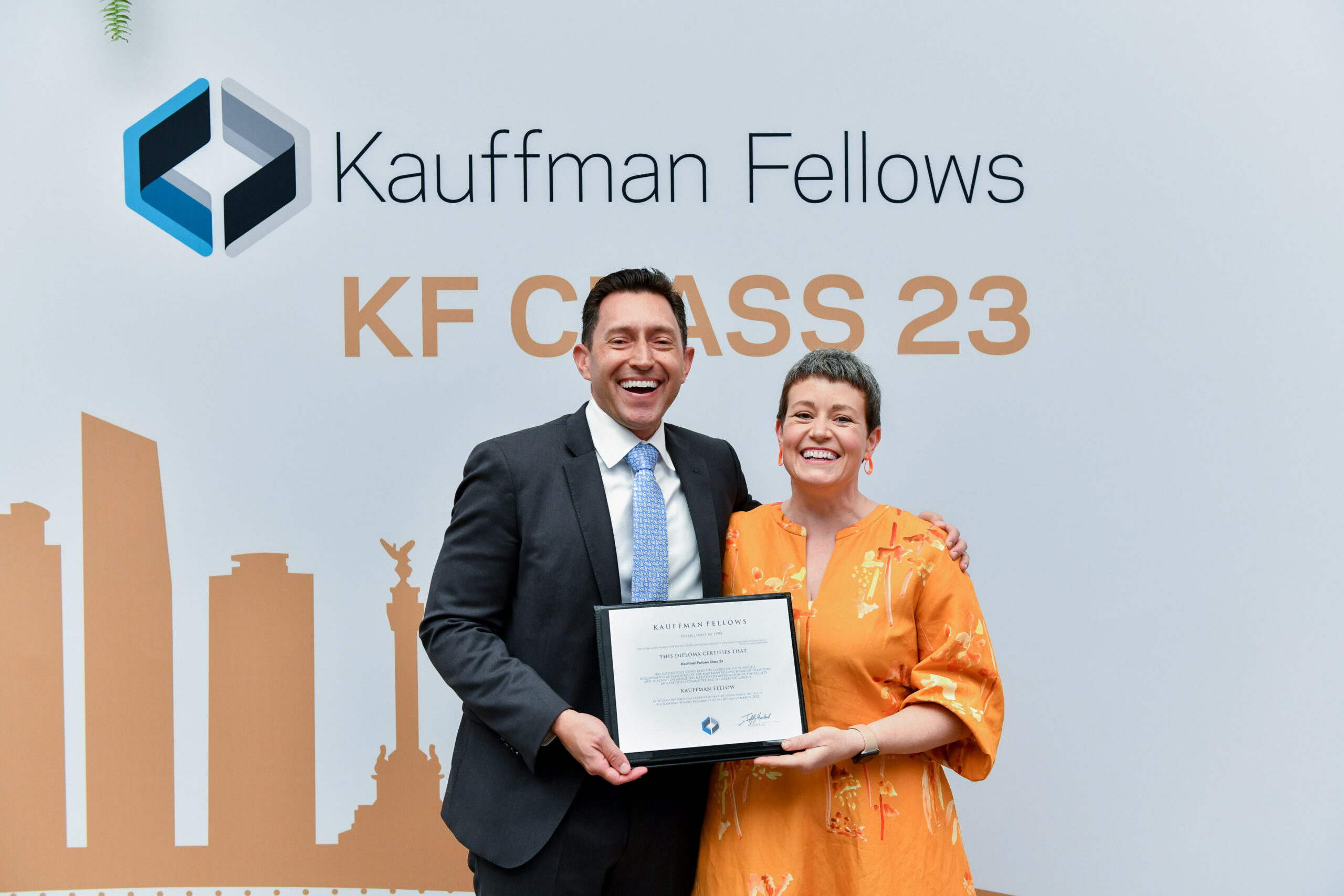 Should I apply to the Kauffman Fellows Program? A Personal Note

I applied to the Kauffman Fellows program in 2018, during Valor Fund 1, and before launching an institutional Fund 2.

Kauffman Fellows are experienced managers, historically outperforming the industry with a 5.8x average realized multiple, 226% greater than the industry RM (according to Kauffman, 2022). As a network, Kauffman Fellows represent over $290 billion in assets under management, have collectively raised over $790 billion dollars in capital over the past 27 years, and have been responsible for over $8.5 trillion in exits to LPs.  There are 750 Fellows spread across 60 countries. Kauffman Fellows help pave the way for the world’s most groundbreaking companies.

Many of Valor’s partners have asked me to share the story of what Kauffman is like for me. I was the 3rd person in Georgia to be accepted into the program in 20 years and one of a handful in the South more broadly. This is the first time I’m sharing my Kauffman story publicly and I hope you enjoy it.- Lisa

When I first heard of Kauffman, I assumed it wasn’t for me. For one, I knew it was “elite” and “expensive.” Those are not things I associated with my life path. I did a little digging, and I learned it was over $100K. I gave up.

It wasn’t until someone I met at the Women in Private Equity conference pushed me, a year later — Trish Costello — that I tried for it. Her perspective was, if I wanted it, and money was a problem — solve that problem when I got to it. One of my flaws can be living too far ahead in future realities. It’s also a strength for a VC. She made sense.

Kauffman taught me to explore the nuances of the future outcomes with a bit more rigor, and ask, why not? What false belief might I be harboring, that being elite or expensive be an issue? Even if it is an issue, just sitting with the problem is something Kauffman has taught me to do much more comfortably. You know when you know. Don’t push your process. Do the diligence.

Accepting and naming unknowns is an amazing tool to make mountains disappear into mist.

How much of me did I let the culture create, and how much is me as I wish to be?

Who would I show up as, if I didn’t allow the culture to dictate its norms? This is Kauffman core value learning for me — that you need to know your own first principles.

So, I applied to Kauffman with hope, thanks to the encouragement of Trish Costello and Jewel Savadelis. (I wonder, would I have gotten to Kauffman through a guy? Probably not. No man ever mentioned it to me, much less championed me in.)

I remember why I applied: because I want to be a great investor.

It is a burning drive in my heart — really, I feel it in my whole body. Not just a decent investor — a great one.  I want to build a lighthouse venture capital firm, and that takes lighthouse people. I had hope that Kauffman’s beacon would illuminate the path. I was also braced to be told I wasn’t good enough.

When I did get invited into the program, a member of Kauffman Fellows Class 23, my first feeling was disbelief. Quickly followed by some financial fear, and also, well-buried, elation. My dream just might be coming true. As a few days went by, the elation grew and the fear faded. It felt like sunrise on the inside. You know the feeling. Ultimately, I examined my desires, and I so wanted to learn . . . My husband and I spoke, and we took out a second mortgage on our home to pay for the program. Kauffman let me make payments quarterly, and that helped too so I did not have to draw down the debt all at once. Problem, solved.

This is a quick photo of our class then, at that first module, packed with leaders from firms like Sequoia, Blackrock, Intel, Maveron, Two Sigma… and my firm, Valor.

That first 2018 Kauffman module, I was scared I was too small of an investor in a region, the South, that was too under-appreciated to add value…

Not to put too fine a point on it, my whole “fund size” was barely a deal size for these folks! Quickly, I learned to leave self-doubts like that behind. In 2018, Kauffman’s learning module put me into a phase of accelerated personal growth. The “light side and dark side” discovery modules were incredibly meaningful. I got to pause, reflect, and decide not ‘who I am’ — but who I am now, and where I want to go from here. It felt almost as if I was invited to rebirth myself, with my adult perspective, and all of my experiences. This was life-changing.

I never was told to seek a “mid life” reboot, and it’s not common in our culture. Because of Kauffman, I got one for the next four years. Instead of a mid-life crisis, I had a mid-life renaissance. Everyone should have this change to re-evaluate who they are, and why, mid-way. It’s a gift.

I loved the quarterly rhythm of the program, because there was enough time to reflect and grow before going full speed into the next topic. Another highlight for me was hearing from other managers — in our case, we learned from Eurie Kim at Forerunner, Mark Suster of Upfront, Clint Korver of Ulu, and Charlie O’Donnell of Precursor, just to name a few. I was mentored by two more lighthouse firm builders, Michael Kim of Cendana and Cynthia Ringo of DBL Partners.  The real experiences of people who’ve built their own firms was inspiring. I could see elements of myself in them, and my path just grew beneath my feet. I felt like I was coming out of a venture capital jungle foot path and onto a sidewalk — my understanding of the possibilities before me just opened up. This feeling is indescribable — but you know it when you feel it. It’s joy.

One more tactical nugget I apply every day–Jeff Harbach, CEO at Kauffman, taught us early in the program, when you’re responsible for investor’s returns and founders believe you can mint their future with a check, you have to actively balance that energy/tension. He shared with our class that if we can’t show up as our best self, fully present, then best to not show up at all. That’s truth. There’s no room for ego or frustration or excuses, like I didn’t have enough sleep. Great VCs get what they need so they can step up into opportunities with the respect and attention the situation deserves. Nothing else will do.

There were, and are, always fine points around venture capital that the modules don’t fill in. That’s where I learned the true Kauffman superpower — the network. I remember one of my first superpower moments was noticing one of the partners in my class was fundraising — he had to miss a lot of sessions to take calls. I asked him to join me for a work out so I could dive into his tactical fundraising mojo. This partner at a SE Asian venture firm (I’m keeping his name private) shared the arc of how you phase a fundraise, and it’s helped me ever since.

Walking the Beltline in Atlanta with a top global healthcare investor, having dinner and talking about ESG with an ESG fund of funds leader in our class, grabbing cocktails in Atlanta with a notable Miami VC, talking late in the evening from my AirBnB in Memphis with an edtech VC in Palo Alto over “old fashioned cell phones,” dining with an LA leading investor talking about how identity in a city evolves around startups, having family dinner around another San Francisco classmate’s beautiful table, pulling on a hookah in Dubai with one of the Nigerian ecosystem VC leaders in our class, getting a detailed email from my forum-mate on what needed to change in my last deck, jogging the California coast with one of Mexico’s top GPs . . .

My “momentum team” became, and is, legion — powered by the intense, intelligent experiences of each Fellow and our shared commitment to show up for each other.

Now it’s 2022, four years later. Kauffman is with me daily. It’s the global VC mind, on tap, 24/7. There is rarely a day that goes by that I am not sharing a deal with a Fellow, reviewing a deal a Fellow sent, congratulating someone on a great life event like the birth of child, or trading insights on real world events.  Yet unlike other professional networks which are “neutral” — Kauffman has a strong point of view, and it’s about better. MUCH better. The best you, the best deal, the best approach — not just on the numbers, but all encompassing — the best expression of who you can be right now. We’re all such overachievers that this kind of energy is pure empowerment. When I think of the Kauffman phrase “connected capital,” I think the first connection Kauffman makes is to connect you to yourself more strongly, and then from there, you have the integrity to truly connect in a meaningful way with others.

When I came to the program, I was already a visionary, and that’s part of why Kauffman Fellows chose me.

At my graduation, my class voted and gave me the Leadership award. I was so humbled–and to think, I almost didn’t apply, because I thought I did not belong with a group of elite, outperforming, incredibly successful VCs! As I graduate from Kauffman, I am a pace setter. That acceleration is thanks to a hundred tiny pushes from the hands, minds and hearts of Fellows on my flywheel.

The question I was asking myself in 2018, when I joined Kauffman was still, “Can I?”

The question I ask myself now is, “How fast can I…?” And that only comes after asking the question, “should I?”

This network removes limits, and puts the focus on how hard can I dream, dare and do. My commitment to the Fellows, present and future, is to be there for them too — to reserve time to share my experiences early and often, so the glimmer of light from my broadened path illuminates the next.

There are lots of paths that need broadening in venture, particularly for the national treasures of our entrepreneurs who come in all ages, races and genders–and I’m here for that. I am still learning, still growing, and still looking forward to how I will grow from this network over time. It’s a lifeline and a lifetime of learning.

Should you apply to Kauffman?

If you are consumed with funding innovation and becoming the best version of yourself as an human being— there’s only one answer. Let’s connect if you need a recommendation.