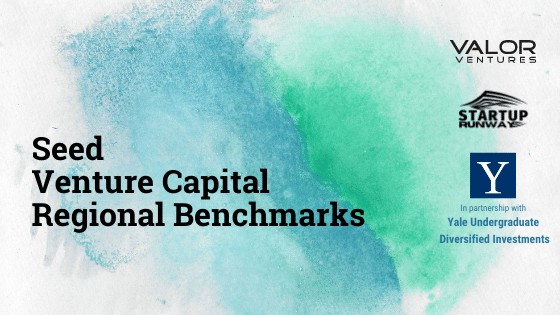 Where do you find the best investments in seed venture capital now?

This is a burning question for investors who appreciate the seed stage, which has some unique benefits: 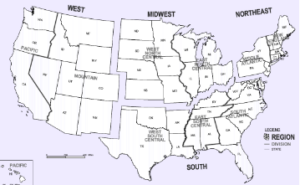 We just took a close look at the valuations, check sizes, and pipeline for seed stage venture capital across the United States. We used the US Census regional areas to divide the U.S. into four quadrants. To help parse the data, we relied on a team of Valor interns from Yale, from the Yale Undergraduate Diversified Investments group. Let’s dive in.

At every other stage of venture capital, and for that matter on up the private equity value chain, the opportunity set of companies is fairly well mapped. Not at seed. At the seed stage, investors are compelled to develop lighthouse brands and deep founder networks to compete and attract dealflow. So where is the dealflow in seed? According to Pitchbook’s 2021 data, more seed deals are done in the West Coast than anywhere else. The Northeast and South weren’t far apart, and the midwest trails significantly. 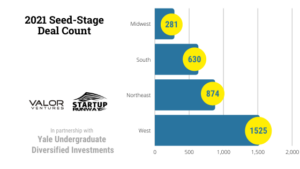 If the most deals arise in the West, which of the other three regions–Midwest, South, and Northeast–has the next deepest vein of startup gold? To answer this question, we consulted the regional demographic growth data in the U.S. Census, which tracks growth in depth. 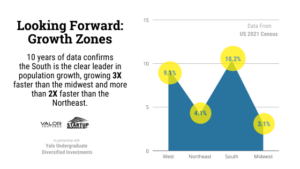 The South is a clear growth leader from a population perspective. It’s growing 2X faster than the Northeast and 3X faster than the Midwest. It’s even growing faster than the West (10% vs 9.3%). With Georgia Tech ranked in the top 3 universities worldwide pumping out startups, there’s a clear path to more startup potential in the South at seed stage than any other region.

To add more context to the question of where would a sophisticated investor invest their next seed check, looked at how startup valuations behave in different regions. The West has the highest seed stage valuation. Even though there are more startups, the supply of startups can’t out-compete the demand of those with wealth to put it to work. The West has similar situations in rent and land price. For the purposes of analysis, we assign the West Coast as our index (=1), because it has more seed stage startup deals than anywhere else.

From that perspective, we can get a sense of how valuations perform in other regions. Regional borders are  perforated by venture firms that work across regions, headlines, and tech’s global culture. Still, regional valuation trends remain, as you can see . . . 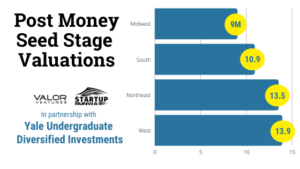 Post-money valuations in the Northeast and West Coast are similar, meaning startups on either coast can expect top valuations. Then it starts to get interesting.

There’s almost a million dollars of difference between the South and the Midwest, despite the fact that the South has a larger pipeline of startups. Is it the South’s lack of access to capital that keeps valuations more reasonable? It’s an interesting question, but outside of the scope of this post. It is true, however, that the South has the least density of venture capital per capita–a fact that drives our team at Valor to continue to scale and grow our platform as fast as possible. In a previous research project, we discovered the West has one seed lead VC firm for every 50,000 people. In the South, it’s one seed lead firm per every 11 million!

This leads us to our final insights, on the availability of seed-stage valuation discounts per region. 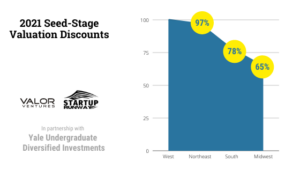 What makes a great seed stage deal is more than the valuation, of course. Founders at this stage often prioritize network, know-how, and local regional access when they choose a venture capital firm.

Andy Yang at Yale Undergraduate Diversified Investments, whose team helped pull together the data with Valor, looked at it this way, “Although the South is currently behind the West and Northeast in most metrics, I believe that the South will catch up in the next decade, especially due to its fast population growth rate and the higher demand for certain cities such as Atlanta and Austin. Many investors are frustrated with the outrageous multiples that companies are being valued at in Silicon Valley and New York, and it’s logical to assume that we will eventually see a shift to the more reasonable valuations in the South.”

At Valor, we are committed to remaining a seed-stage venture capital firm of choice for outstanding founders building world leading companies in their fields. We work with founders who are focused on getting what they need to succeed more than a transitional checkpoint along the way such as first valuation. The South’s growth is not accidental–it’s fueled by trends like having a long standing Top 3 startup production university, almost 1/3 of the Fortune 1000 headquarters, 65% of HBCUs, great weather, top technical research centers like Research Triangle, and unbeatable lifestyle affordability.

We hope this discussion has helped founders and funders alike appreciate the variation in seed stage across our dynamic venture capital landscape–and focus on the best value going forward.