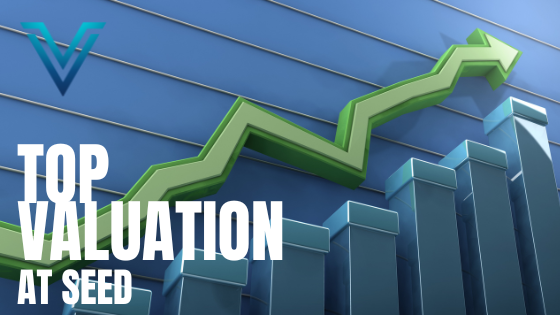 How Founders Get Top Valuations At Seed

At Valor, there two numbers that have a big influence on the valuations we set at seed: historic revenue growth and new revenue acceleration. Why do they matter so much?

It’s easy to mistake revenue, a number, for momentum, a vector. At Valor, we’re literally asked every day if we have a “minimum revenue.” We do not. We are much more interested in gaining insight into revenue growth.  So how do you know what good revenue growth looks like? One way is to look at the type of growth needed to raise a great next round, even if the founders don’t anticipate raising a next round yet. Let’s dive into that approach.

When it comes to seed, I like this blog post by Initialized that lays out how they saw good Series A revenue last year. Given the frothiness of the period that post was published, it is unlikely these metrics have loosened. For enterprise SaaS, let’s accept for a moment in time that good revenue for a Series A is $1-2.5M, with revenues above $2.5M as outstanding. That says little about the revenue at seed, right? Exactly. So how fast could you get to, at bare minimum, a million in revenue so you had a shot at a valuable next round?

Even at $2.5M in revenue (the “outstanding” part of the Intialized chart) isn’t sufficient alone. That’s why asking VCs for “a number” is like asking which color blue the sky is. There is just no right answer.  However, the growth rate–the trajectory of the startup–that is knowable.  The growth rate associated with being ready for a Series A is triple digit year over year growth (often also expressed 2X or 200%, 3X or 300%, etc.).

Thus, the concept of a startup’s future readiness for a next round, for a seed investor, is a matter of solving backwards. In a nutshell, at Valor we’re always asking ourselves,

If you’re looking for high valuations, revenue acceleration is one of the areas that is among the highest impact. It’s also generally directly under a founder’s control. However, in practice, working toward an annual goal, like triple digits, loses relevance in the hand to hand combat of winning your startup a place in this world. I like to break it down further.

Since most startups are managed with monthly cycles, I’m a big believer in the growth hack of going for sustaining 15% month over month growth (and sometimes you’ll be happy with 10%). It’s a number that’s relatable and operable. It’s reportable. You can visualize and instrument the number of new customers you need. You can hold people accountable (or maybe just yourself) in a weekly meeting.

This kind of month over month growth is a number that lands you well within the top valuation zone at Series A, once you’re accelerating over a $1M run rate. It can help you get the best possible valuation at seed, too.

Other factors that contribute to seed-stage valuation

How many customers you lose month to month and how many new customers you gain month over month are also factors in an initial seed valuation. However, they pale in comparison to revenue acceleration. If you can sustain accelerating month-over-month-style growth, you’re in a league of your own and you’ll notice investors pay close attention.